Vacation for your pet- tips@ 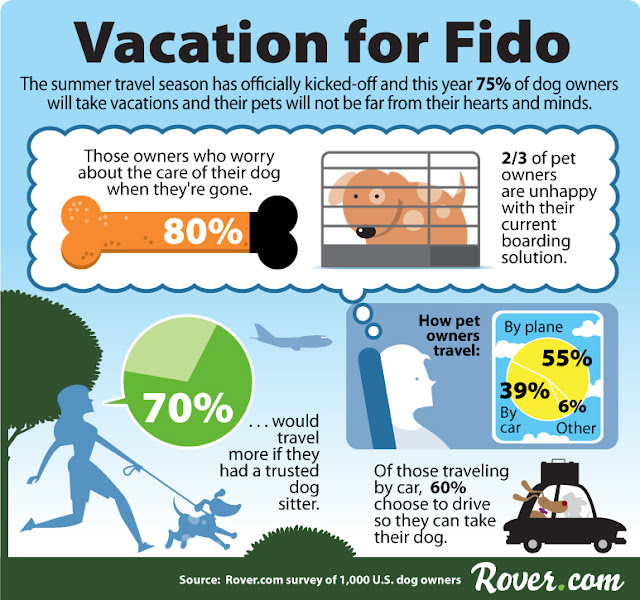 If you’re traveling with your pet this summer and plan to fly to your pet friendly accommodation, make sure you familiarize yourself with the airline’s pet embargo policy before you book your flight.  During the summer, the heat can make pet travel difficult because many airlines don’t allow pets aboard flights-as checked baggage or as cargo-when temperatures are high. Airline pet embargoes are in the best interest of your pet and play a vital role in ensuring his safety.

Not only is air travel stressful for your pet, but it can also pose serious health risks. Being confined in his carrier for long periods of time during the hottest months of the year is potentially dangerous for your pet and may lead to dehydration and heatstroke. In addition, certain breeds, such as brachycephalic (snub-nosed) dogs and cats, are susceptible to pulmonary distress when temperatures are extreme.

According to the International Pet and Animal Transportation Association (IPATA), embargoes protect pets from exposure to extreme heat while they’re in the holding areas and terminal facilities, while moving them between terminals and aircraft, or while they’re on an aircraft awaiting departure.

“Heat embargoes are critical during the summer months,” says Sally Smith, past president of IPATA. “They protect our pets and keep them safe and comfortable while traveling.”

Since airlines impose embargoes to ensure your pet’s safety, there are no exceptions. However, if an embargo is in effect on the day of your flight, the airline will work with you to re-route your flight, if possible, or schedule your flight for another day.

Although each airline establishes its own policies for pet embargoes, the following are a few commercial airlines and some of their regulations.

Alaska Airlines – Although Alaska Airlines doesn’t have any embargoes scheduled this summer, if temperatures are too high for pets to travel safely, they may place an embargo. However, your pet may travel with you in the cabin if he fits in an approved carrier that can be placed under your seat.

American Airlines – To ensure your pet isn’t exposed to extreme heat, American Airlines imposes an embargo any time the current or forecasted temperature is above 85 degrees Fahrenheit at any location on the itinerary. However, if your pet fits in an approved carrier that can be placed under your seat, he can travel with you in the cabin.

Delta Air Lines – To ensure the safety of your pet, Delta places an embargo on pets as checked baggage from May 15 through September 15. If at any point—origin, transit, destination—the temperature is forecast to be above 85 degrees Fahrenheit—or 75 degrees Fahrenheit for brachycephalic pets—your pet can’t travel. However, your pet may be able to fly as cargo via the Summer Live Animal Program. (Restrictions apply, particularly for brachycephalic pets.) Launched in 2011, the program, which is in effect from May 15 through October 15, lifts temperature restrictions and provides safe transportation of your pet in select cities. Delta Cargo uses climate-controlled vans to pick up and deliver your pet to or from the plane, holding areas, and cargo facilities. Your pet is also loaded or unloaded according to specific time frames. In addition, your pet may travel with you in the cabin if he fits in an approved carrier that can be placed under your seat.

Southwest Airlines – Since Southwest Airlines doesn’t allow pets to travel as checked baggage or in the cargo hold, they don’t impose pet embargoes. Your small cat or dog can travel with you in the cabin in an approved carrier that is small enough to fit under your seat.

Since each airline has a different summer pet embargo policy, please take the time to review our Airline Pet Policies.  And don’t forget to review our Pet Travel Tips for Flying and check out the airline-approved carriers at the TWP Store.

Your pet’s safety is your top priority. Choosing an airline that fits your needs can help ensure the flight is a positive experience for both you and your pet.
Posted by Unknown at 8:38 PM 13 comments:

Posted by Unknown at 2:20 PM No comments:

Some Places are Better for your pets than others!

A new study shows that certain states offer dogs and cats a better chance at a long, healthy life.

Some dogs sleep outside and guard the house. Others have wardrobes and spend their day in a purse.
A new study shows that dogs and cats have a better chance at a long, healthy life in some states than in others. Louisiana and Mississippi offer the shortest average life span for dogs and cats, while pets in Colorado and Montana live longer, according to the 2012 State of Pet Health Report released by Banfield Pet Hospital, the world's largest veterinary practice.

Experts say states with the longest-living pets also have the highest neutering and spaying rates, more pets living inside and fewer regional infectious diseases.
"It's all about lifestyle, what your pet means to you and how you take care of them," says veterinarian Sandi Lefebvre. "There are different attitudes, different levels of education and they tend to cluster in certain areas of the country."
Cats live the longest in Montana, Colorado, Rhode Island, Illinois and Nebraska. Their life spans are shortest in Delaware, Ohio, Louisiana, Kentucky and Mississippi.

States with the longest life span for dogs are South Dakota, Montana, Oregon, New Mexico and Colorado. As for the shortest: Mississippi, Alabama, Louisiana, Delaware and Maryland. Southern states have high rates of heartworm because of heat and mosquitoes. Northeastern states are most likely to have Lyme disease because of the ticks that carry the disease.
In warmer states, more pets live outdoors where they are susceptible to these diseases. If they haven't been neutered or spayed they will have more aggressive behaviors, Lefebvre says. "They are out roaming, fighting, looking for partners."

In the North, pets are more likely to be indoors. "You do not want a sexually intact cat in your home," Lefebvre says. "It howls, pees all over the place, so spaying and neutering is obviously important."
Adonica Jones-Parks, 45, of Cincinnati, says she learned the hard way: "When I had my first cat, I did not have him neutered, and he was spraying everywhere, and then he ran off for a few days. Now I know it calms them down."

Nearly 20% of the cats in Louisiana and Mississippi aren't spayed or neutered. In Montana and Colorado, states with the longest life spans, that number is closer to 8%.
Neutered male dogs live 18% longer than non-neutered males; spayed female dogs live 23% longer than unspayed female dogs, according to the report. "But even if a pet is spayed or neutered, it still needs shots, training, nutrition, dental care and parasite control to live a long, healthy life," Lefebvre says.
Posted by Unknown at 2:00 AM No comments:

Who’s on my team?!
If you a 5k9 team captain you can see your other members by CLICKING HERE.

Woofstock: A Festival of Fidos 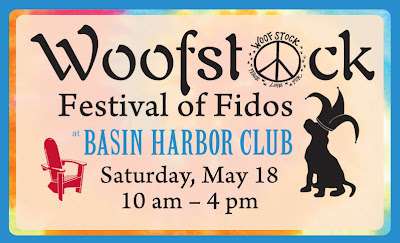 Costume parade, bounce houses for the kids, and a 5K and 3K run, plus much more are on the schedule for the Woofstock festival. There will also be demonstrations by dogs who do agility training, K9 dogs, and Disc dogs. Bring a camera and be ready to be wowed by these talented pups! Proceeds from the event go to the Homeward Bound Animal Welfare Center. Bring the family and spend the day with other pet lovers!

Posted by Unknown at 4:00 AM No comments:

When: May 11. 2013 7am to 11am
Where: Walter E. Long Metropolitan Park 6614 Blue Bluff Road Austin, Tx
Admission: Varies
More information: 5k9WalkRun.com
Hotels in Austin
The Petco 5k9 Walk RunTM presented by Purina ProPlan is the national walk/run series open to both people and pets! At 8am the 5K walk/run starts and awards will be given out at 10am. Stick around afterwards to see all the vendors who will be there, some will be selling the latest and greatest pet products, some will have information about how to enrich your dog’s life, and others may even have some fun games for you and your pup to participate in. This promises to be a fun day!

Posted by Unknown at 3:30 AM No comments:

Join thousands of your friends on May 11th, as we walk, run, eat, drink and have fun with our furry friends. It’s the 26th annual OHS Doggie Dash, when we let dogs rule the streets of downtown Portland. Come with or without a dog! There will be vendors on site with great pet products, food carts, music, and lots of fun. After the walk/run, enter your pup in one of the costume contests and help raise over $450,000 for pets who need forever homes and TLC.

Posted by Unknown at 3:30 AM No comments:

Safe Boating with Pets- featured on Trips with Pets

Tips for Safe Boating with Your Pet

Before you hit the high seas or local lake, be sure to follow these common sense tips to ensure your pet's boating adventure is a safe one.

Posted by Unknown at 1:26 PM No comments:

Registration: Online registration for BARK IN THE PARK has now closed. You can still register the morning of the walk, at Montrose Harbor starting at 7 a.m. at the red registration tents.

Parking: Parking for BARK IN THE PARK will be available for $10 at the Montrise lot. Street parking is also available on a first-come fist-serve basis.

Free Cat Pin—your cat is not able to participate, but we have pins you can wear in his
or her honor. For more fun, bring a photo of your cat and make your own pin to wear in their honor.

When: Saturday, May 4, 2013 Where: Montrose Harbor, Chicago, Illinois Onsite Registration: 7 a.m.–10 a.m., red tents Run Steps off: 9:00 a.m. (no dogs, please) Walk Steps off: 9:15 a.m. The event usually wraps up around Noon.
Can't join us in Chicago? Create your own event. It's simple. Click the link below to register. Make sure you click the "Virtual" option. We will send you your t-shirt and bib number. You can purchase 50/50 cash raffle tickets (need not be present to win), doggie t-shirt, or bandana. We'll send it all to you so you join us virtually on Saturday, May 4th, or any day in May that you prefer. Remember to create you personal fundraising page to support the work we do caring for animals and advocating for them!

Fundraising: Bark in the Park is Chicago’s original dog party. Held the first Saturday in May every year, it is The Anti-Cruelty Society’s largest single fundraiser. By raising funds for Bark in the Park, you are supporting our open doors for any animal in need 365 days a year. We hope you will join our commitment to caring for animals most in need. We will put the fun in fundraising, and you can win some great prizes for your efforts.


Online registration for BARK IN THE PARK has now closed. You can still register the morning of the walk, at Montrose Harbor starting at 7 a.m. at the red registration tents.

Registration is $40 for adults and $15 for children 15 and under.
Dogs and children 3 years and younger are free.
Click here to download a registration form.
Bark in the Park
Montrose Harbor
601 W Montrose Ave,
Chicago, IL, US

Posted by Unknown at 2:08 AM No comments: